The 2015 drag racing season has concluded for the Hanna Motorsports jet team, and a successful one it was! The team appeared at 30 events with 70 contracted appearances across a dozen states and Canada for the 3 respective race cars. Mother Nature was very kind throughout the season for the team as well as they only experienced one rainout the entire summer.  Unfortunately, she wouldn’t be as kind towards the end raining out the last 3 scheduled events.  But all in all, there was plenty of racing to be had and the team didn’t disappoint only missing 1 run (due to mechanical failure) out of over 125 passes made over the course of the season (99.2%).

Rich Hanna in the GOJO Heavy Duty Hand Cleaner Firebird and Ken Hall in the XLerator Top Secret jet funny car didn’t disappoint running flawless side-by-side runs with Ken coming out on top by a 3 run total at the end beating Rich 30-27. No doubt the best race of the year still ended up being the identical e.t. pass at the Summer Nationals in Englishtown New Jersey, with only .001 difference in their reaction times as icing on the cake. Ken finished with a top speed of 282.10mph and Rich recorded the low e.t. for the two cars with a 5.69.

The Queen of Diamonds also had another banner year in the radical sidewinder.  The car ran a best of 5.28@298mph and only lost 5 rounds of competition in over 50 total passes. “There is still much potential with the Queen of Diamonds II” said crew chief Rich Hanna.  “When we are running all 3 cars in a busy schedule mid-summer, it is difficult to test new things at the same time we are making exhibition runs.  We have gathered a lot of exciting data with the RacePak computer and plan to do extensive testing before the 2016 season.  Look for many new and radical changes with the car in the near future”. The Hanna Motorsports team would like to thank GOJO Heavy Duty Hand Cleaner, XLerator Hand Dryer and Daigle Truck Master (Chicopee, MA) for all of their support helping make the 2015 season an incredible success. And Hanna Motorsports would also like to extend a very special thank you to all of the fans who follow and cheer on the race team. 2016 is right around the corner and looks to be as promising as ever for the Hanna Motorsports stable. 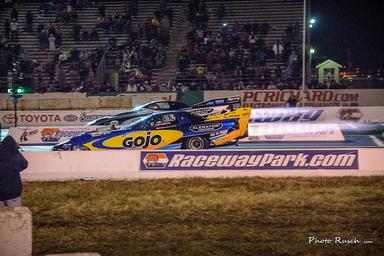