First Strike is Back!

Rich Hanna’s jet funny recently had a face lift.  After 7 years of corporate backing, the

in 1993 for Rich’s debut season.  The “First Strike” name was one that has been on the

side of Rich’s cars from the beginning, a name that has double meaning for the now

Rich began testing jets at 19 years old, but at the same time had another passion and

aspiration, bowling.  He had bowled from the age of 8 and developed into a top left

summer and the peak months for bowling in the Northeast were in the winter. As Rich

local regional scratch tournaments, averaging over 225 and even bowling several PBA tournaments along the way.

At the same time, Rich’s racing career was taking off as well.  He became the youngest licensed jet funny car pilot at 20 and won his first race which was nationally televised on TNN. The combination of the two sports is where the First Strike moniker came from.  The name obviously has the “strike” bowling implication while “First Strike” has a military ring to it referring to when someone strikes first in battle (typically with a jet powered fighter), they usually win.  And the name was born.

“I had a lot on the plate at the time” Rich reflects. “In 1998, I found myself with a new house, married and my wife Jennifer was expecting, had a new job at Pratt and Whitney, just built a 3rd team car and still bowled. Juggling all of this was just too tall of a task.  I didn’t have the time to dedicate to bowling at a level that I was used to competing at, something had to give. I opted to give up bowling at that point and focus on family, my job and racing.”

Rich didn’t even touch a bowling ball for 6 years! He then joined a work league and actually bowled more for pleasure for the first time since he was a kid.  “That league at Pratt was the best, I fell in love with the sport again. It reminded me of why I became involved with it so many years before.” This past fall, Rich joined a league with his father Al and still maintains a 220 average only bowling 3 games/wk.

The First Strike name is back and it definitely has a deeper meaning for Rich.  It is a reminder to keep striking first to have that best chance of winning but also is a fond reminder of a bowling career that almost took off as well…. 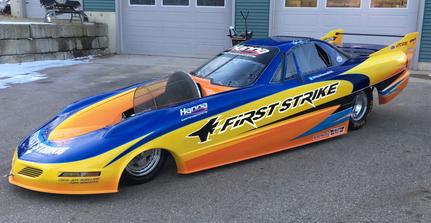