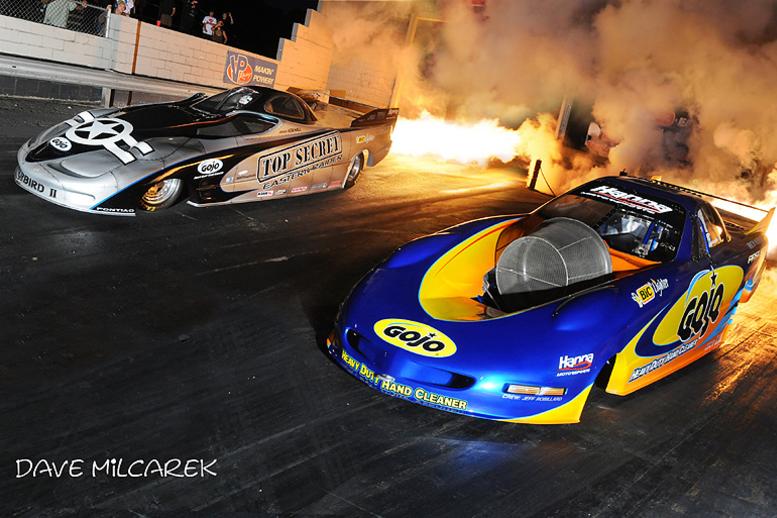 Enfield, CT – March 5, 2015 – Al Hanna, President of Hanna Motorsports Jets today announced an agreement with NHRA and Senior Vice President-Racing Operations, Graham Light, for the appearance of the teams jet funny cars, the 'GOJO Firebird' and the XLERATOR 'Top Secret' Firebird, at four 2015 NHRA National Events. Their 4 event tour will commence at the prestigious NHRA Gatornationals in Gainesville, FL Mar 12-16, 2015.The team will have both cars on display the opening day of each event and drivers Rich Hanna and Ken Hall will meet fans, explain the workings of their unique machines, and sign autographs.  "Running NHRA National Events is very prestigious, and we're really looking forward to meeting and performing for the NHRA fans", said Rich Hanna.  "Rich and I are both from long time NHRA racing families and running these events is a dream come true for me" said Ken Hall.In addition to the Gatornationals, the team will run several additional events including the initial 4-Wide Nationals in Charlotte, NC, March 27-29, the Toyota Summernationals, Englishtown, NJ, June 4-7, and the Keystone Nationals, Reading, PA, October 1-4.The Hanna Motorsports Team fields three exhibition race cars, and appears at more than 70 events each year across the US.  In addition to the aforementioned two jet funny cars, the team also fields the all-new and revolutionary "Queen of Diamonds II" semi-streamliner 300 MPH Jet Dragster driven by Jill Fazekas.  Recently, the team took the new dragster to Aerodyn/A2, the NASCAR wind tunnel complex in Mooresville, NC, and ran the car through its paces making more than 25 major tests in the tunnel.  This is the first time a jet dragster has ever been wind tunnel tested, keeping with the advanced technological approach of the team to this unique category of jet exhibition machines.2016 will be the 50th year of Al Hanna's career in professional drag racing.  In 2014, Al and Ellen Hanna celebrated their 50th wedding anniversary.  They look forward to the future and the success of professional drag racing.