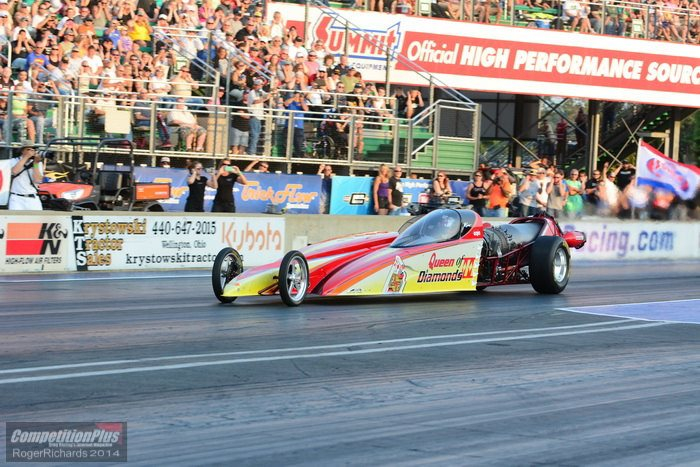 On Saturday, August 9 the Queen of Diamonds II returned to Norwalk looking for revenge. The QOD car under the Hanna Motorsports banner had won every Nite Under Fire race held at Summit Motorsports Park since its inception in 1998. Jill herself had won the race 6 years in a row until last season. The team debuted the new side driver dragster just 2 months previous to the event and ended up a tenth off the pace to the eventual winner Lou Perria in the Terminator dragster.

This year’s entries were again Jill, Lou Perria (defending champ), and two Chicago cars: Al Z’s Hotblade and Scott Holdridge in the Airforce 1. The event would be the same format as previous years, all run 1st round and then Chicago style with the quick two cars in the final. First round saw Jill end up number 1 qualifier with a 5.44@291. Number 2 and racing Jill in the final would be the defending champ, Lou Perria with a 5.54. Following were Scott Holdrige (5.67) and Al Z (no time).

In the final, Jill had the race from the green light as Lou Perria red lighted his chance of making it two in a row. He needed to take the chance as the QOD II had the performance edge running a 5.39@292.90 to Lou’s respectable 5.47. It was a great night for the team winning the title back with the new revolutionary machine in front of the sold out Summit Motorsports Park audience.

The team now gets ready for the last part of the season with its next stop at the Jet Warz race in Budds Creek, MD August 23.