The race season is well under way now for the 3 car Hanna Motorsports team.  Race dates have taken the team to a dozen states with thousands of miles logged in, and it has been a successful few months as well.

The team just finished a “mid-west swing” racing in Ohio (2), Kentucky (2), Tennessee and Iowa. It started in the middle of June as the funny cars of Rich Hanna and Ken Hall were part of the prestigious NHRA Hot Rod Reunion in Bowling Green, KY.  The event features many of the top nostalgia nitro teams in the country as well as the famous “cackle fest” ending the event. Rich then raced at Jackson Dragway in Jackson, TN being the first jet to run there since Aggi Hendriks in 1987. The funny cars rocked Kil-Kare Dragway in Xenia, OH and then National Trails Raceway’s Nite of Thunder which was a packed house.  At this event, Rich and Ken brought their close jet racing to another level with races having winning margins of only .011, .003 and .013.  That will be tough to top!

While the funny cars were doing their thing, so has rookie pilot Sarah Edwards in the Queen of Diamonds II.  Sarah also hit some mid-west tracks like Mountain Park Dragway in Clay City, KY and Cedar Falls Dragway in Iowa.  At the Cedar Falls event, Sarah was lined up against top rival Scotty “Heat” Holdridge and his 50 Cal machine.  Earlier this year, Scotty had Sarah’s number at the Cavalcade in Ohio topping her 3 straight runs.  Sarah would turn the tables here ousting Scotty on two straight hole-shot victories (5.45 over 5.35, 5.35@295 over 5.30@299). This sets the stage for a dramatic 3rd meeting between the two at the Summit Motorsports Park Nite Under Fire August 13.

Check back to the Hannamotorsportsjets.com website for more race results and schedule updates throughout the season. 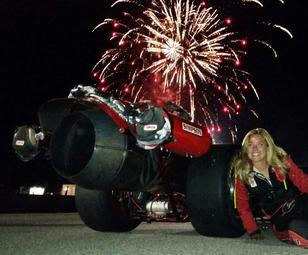 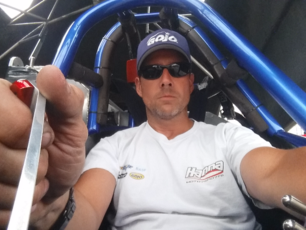