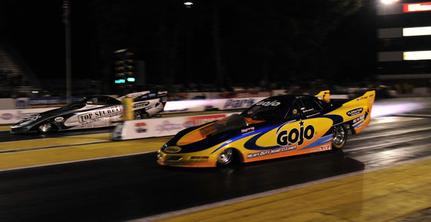 ​Perfection at the Summer Nationals

The Hanna Motorsports jet funny cars of Rich Hanna and Ken Hall agreed with NHRA to appear at four NHRA Nationals events in the 2015 season.  The reason was to reach a different racing populous via live exposures, radio, Twitter, FaceBook and National Television (events are covered on ESPN 2) for their respective sponsors being GOJO Heavy Duty Hand Cleaner and XLerator Hand Dryer.  The four events are the Gator Nationals, the 4-Wide Nationals, the Summer Nationals and the Keystone Nationals.

The team had already put on fantastic shows at the first two events of ’15.  This past Friday night on June 5, they would have the entire facility (fans, racers and event staff alike) all talking about their performance.  Following an incredible nitro funny car and top fuel qualifying session, the jet funny car team took the track.  The last 4 jet funny car races in the past two weeks have produced win margins no greater than .014 which is only 2 feet.  This next run would be one of a kind though.

Ken Hall left the starting line first by the narrowest of margins.  His .036 reaction time eked out Rich’s .037, only one thousandth of a second later.

The finish line scoreboards told the rest of the story, identical e.t.’s!  5.754

seconds for both.  These times, coupled with the reaction times off the starting

line, gave Ken Hall and the XLerator car the win by .0011, mere inches!  It left

even team owner Al Hanna taking a double take at the score boards.  “I knew it

was close.  They left as one and ran side by side as one the entire quarter mile.

I didn’t even know who won after walking away, I was just dumbfounded at the

possible” Rich Hanna stated after the run.  “But all of the tuning and calculating

special night.  A very proud moment for us here at Hanna Motorsports”.

The team displayed the rest of the weekend for the droves of fans in Englishtown, one more National event will be run in October.  Next stop sees all 3 team cars at Atco, NJ on June 13.  We know the funny cars will again be close but probably no closer than they were on this night.