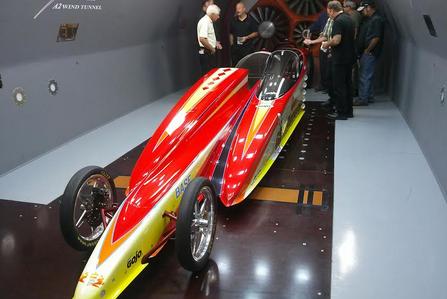 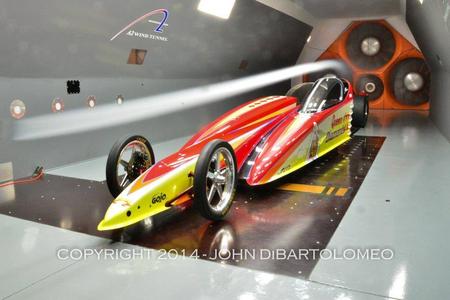 QOD II tests in the A2 wind tunnel

On Monday, Sept 29, the Hanna Motorsports team made drag racing history by visiting and testing the revolutionary Queen of Diamonds II jet dragster in the A2 wind tunnel located in Mooresville, NC. Never before has a jet drag racing machine been in a wind tunnel for aero testing. It was a proud moment for the team which has actually been in the works for over 20 years!

In 1994, Al Hanna had revolutionized the jet funny car category and developed the first ever successful center drive jet f/c. The body of the car was a Pontiac Firebird and coupled with their Auto Palace stores sponsorship, the team was also supported for several years by GM. Al had reached out to GM for aero advice for the one of a kind machine and they provided help from the likes of their top aero man at the time, Gary Eaker. Gary flew to CT from Detroit and worked for several days on the machine making radical changes to the body which also made radical improvements to its performance immediately. There, a friendship between Al and Gary was formed as well.

Al had kept in contact with Eaker over the years, as he moved from GM to Hendrick Motorsports and NASCAR innovating many well known updates still seen on the cars today. He would eventually leave Hendrick to follow a life-long dream of owning his own wind tunnel, and Aerodyn was born. In 1994, Al had wanted to put the jet funny car in the wind tunnel, but the opportunity could never develop. In 2013, Al and Rich had built another new radical machine in the QOD II and again the idea arose, would it be possible to have this car tested in a wind tunnel? Al contacted Gary and the two made it finally happen this past week.

Many Hanna Motorsports team members were on hand for the almost once in a life time opportunity. The team made a total of 24 test runs in the A2 wind tunnel run by Gary’s son Geoff. An incredible amount of data was gathered and also the event was documented by Drag Racing Action’s John Dibartolomeo.

“It was a dream come true to see our machine in one of the top wind tunnels in the country. A true honor” said Hanna Motorsports vice president Rich Hanna. Al added “This has been a goal of mine since the center drive car in 1994, our jet car in a wind tunnel. What a day! Truly an immediate highlight of my 50 year career.”

The team plans on reviewing the data and making changes to the car for the 2015 season. They may even bring the car back to the wind tunnel in the spring of 2015. Rich said after the test “It was our first time here, so we tried to be as prepared as we could, which we were. But we now have a better idea for what to do next time as well. Things will only get better from here!”

Two days earlier, Jill had run at Maryland International Raceway at a PMRA National event. She set her best time with the new car with a 5.29@299.93mph. With the information gathered at the wind tunnel, it is only a matter of time before the new car breaks the 300mph barrier and beyond!