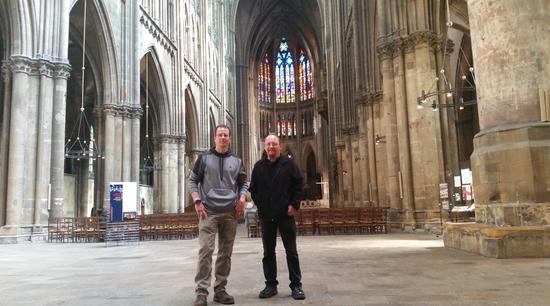 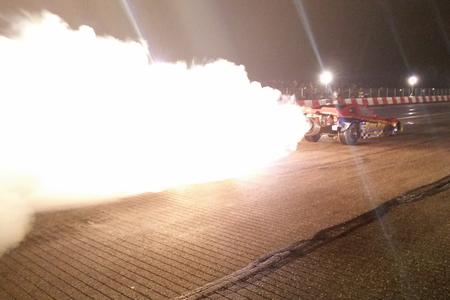 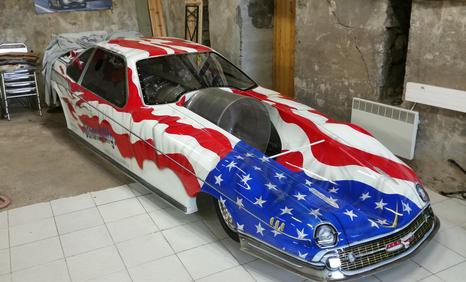 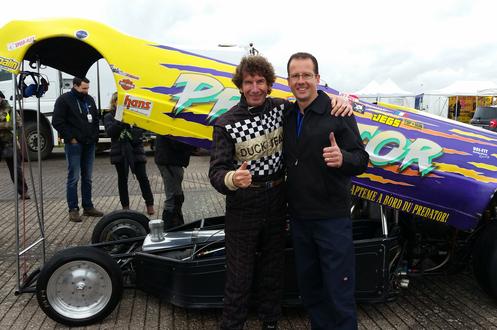 Last summer, Rich Hanna was contacted by France native and jet car owner Donald Pottier about purchasing a jet funny car in the U.S. and asked for Rich’s help/advice.  The car Donald ended up purchasing was Dale Keesee’s Blaze of Glory 57 Chevy J60 out of TN.  It shipped to France the week after the Gator Nationals with its debut being at the 2015 Drag Power Show in Chambley, France May 1-3.  Donald invited Rich over to the show as well as being able to be there when Donald made his maiden voyages in his new machine.

It was Rich’s first time to Europe.  Rich also brought along long time Hanna Motorsports crewman Gary Bengston for the 6 day journey.  They flew into Luxembourg via Charles De Galle in Paris.  The first day was about meeting the team and seeing Donald’s shop.  The next 4 days would be spent at the converted airport of Chambley for the once a year event.  Unfortunately, Mother Nature had other plans!

Rain was the main course over the next 4 days!  This event is the premier drag racing show in France and has drawn over 10,000 daily for the past several years.  Cold and rainy conditions made it difficult to say the least.  But Saturday saw a window of dry opportunity to finally pull out the new machine.  The car was one of the highlights of the show displaying its incredible power.  Donald gave it a half track blast the first time out getting used to the new ride.  He was happy with the performance and certainly impressed with its overall power!  Over the weekend, Donald was also able to run his jet quad dubbed “Monster Quad”, his jet motorcycle “Furious Fire”, and his 2 jet funny cars “Fire King” and “Predator” (a unique 2 seater).

Although the show was wet, the people in attendance still made the best of it.  About 5,000 were on hand for Saturday’s affair.  “I was amazed by the enthusiasm and interest shown by the people of France.  We are spoiled in the U.S. by the amount of tracks and events but this is truly a once a year deal and rare opportunity for these people.  A true happening for everyone over here, and they so appreciate it.” Rich Hanna said about the fans in France. “I’m even more now looking forward to coming back and bringing the sun with me next time.  I can only imagine what this place is like when Mother Nature cooperates!”

Rich and Gary were able to see some sights along the way too.  The city of Metz showcases a most beautiful Cathedral.  Rich and Gary were also accompanied by their interpreter Raphael Canudo, whom they would also like to thank for his hospitality.

Donald will be running his new car at the end of May in Santa Pod, England and in August at the Olympics of Drag Racing in Okenheim, Germany.  The entire Hanna Motorsports team wishes Donald the best with the new car and Rich and Gary look forward to returning to Chambley in 2016!